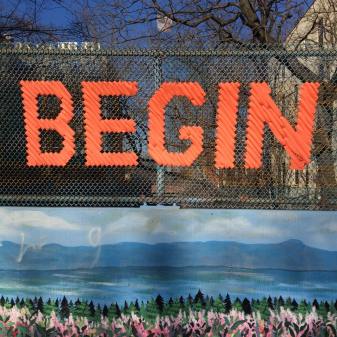 For as long as I can remember, I’ve followed the mantra of “just start”.

Start and see what happens.

Begin and then begin again.

Lately the topic of beginnings and endings has come up quite often. Maybe it’s this moving from Winter into Spring. The up and down weather that reminds us that nothing is absolute. I always smile at how we cling to the day-before weather, “but it was so… warm yesterday… or it was just snowing two days ago… and now”. I smile at these conversations around me every single year.

For a long stretch of time it was a tremendous struggle for me to keep starting. It felt like every time I rebuilt a tiny bit of myself or a bit of direction or foundation, it was ripped away again. Taken away by things out of my control most of the time. It was a time of deep pain and teaching, really. I would become so hurt by the breaking down and open again and again until it felt as though there was nothing left. Like a grown up child whose blocks kept getting blown up and torn down by another, except with what felt like greater consequences. “I can’t do it any more”, I remember saying. “I just can’t”. When, really, it was all internal sensation and feelings that I just didn’t want to have any more.

I was a highly creative child. Always making. Writing. Painting. Putting on plays. Always building new things without any thought of the outcome. I was just in the process. In the joy and love of creation.

That creativity was shut down for a long time. Out of fear and out of other parts of life that seemed to be more important or were valued more. I kept shutting off my ways of accessing that realm. No more painting. No more drawing. The last piece to close off was writing. Story telling.

Several years ago, I was frightened and felt the weakest tiny bit of this energy that I had so tightly turned away from appearing. I sat down and wrote a short little piece. Trembling, I shared it. I fell in love with this energy again. It’s like the tiniest spark of it had reappeared and I wanted to keep it safe and sheltered.

I kept being with it in little ways. I started to draw again even though the first time I did, I was terrified. Imagine, being terrified of sitting down to draw. It was as if I didn’t know what to do. The trauma of having everything I created or had the potential to birth constantly taken away was stronger than my ability to create. Yet it kept calling. So, I let it open a little bit and then would retreat with a “that’s enough for now” feeling.

Recently I’ve realized just how much my creative centers of the womb and throat have been injured. Closed off. Wounded. It’s not a coincidence that these areas have been struggling just as I have been struggling with being able to create and allowing myself the freedom to do so as these chakras govern creativity and giving voice. I see now that I limit myself in these areas.

Writing, for example. I can trace the progression of shutting it down. Something I always loved to do became something I cut off, shoving it down and rationalizing and ignoring the pain of doing so. Only there has always been a voice with me about writing a book and that voice has been getting stronger and stronger. It’s a mixture of whatever it is wanting to come out pushing, pushing, pushing itself to come through me and the resistance I put in front of it.

Through the resistance that has grown, I seem to have had a concept appear along the way that I had to know what I was creating at the beginning. As though the entire end result needed to be known beforehand. If I didn’t know then there was no point in starting because what was I starting? Who knows? I had to figure it out because being in the thought pattern of “I don’t know what to do” or “I don’t know how” is enough to stir up moments where I was frozen in past traumas.

That’s not what happens though. If I can move through that fear and freezing, then when I sit down to draw on a blank page, I’m always surprised by what flows through and out. It wasn’t there beforehand. It wasn’t premeditated. It wasn’t created in advance. It is the process of creation that brings it into being. Not the figuring out in my head or the beating myself up for not doing it.

I seemed to have become stuck between fear of doing and fear of not doing. Waiting between both edges for something to shift.

Now, the shift that was planted all those years ago with that glowing ember of a first story has taken on more energy. I’ve listened to the internal pushes and screaming from inside of me. In the past few weeks I’ve found a new practice. Every morning now I wake up, sit for a short meditation practices through the chakras, and then write. Stream of consciousness pours out. Sometimes from my dreams the night before sometimes channeled from who knows where. Pure creation. Often, I’m surprised by what appears – I never could have anticipated what was to come.

My stumbling block with starting was that I had to know all possible outcomes. Perhaps to protect myself from feeling hurt or having to know how something will turn out. That I will have an end product – possibly one that I could earn money from. Or, even worse – what if it comes to nothing? What if I do all of this and nothing comes? I don’t know how to write a book. I don’t know what it is. What am I going to write about? What if there’s nothing to share or it’s not good enough or people don’t like it? What if I don’t “have it”? I “shouldn’t” be spending time doing this. It’s not practical. What if, through this, I don’t know where I’ll land? Or if I’ll be able to do it? Or be safe enough to? Supported? Where do I put my feet? Will the ground get taken away again? The creation all falling apart? Crumbling to bits and being knocked down? The writing that I’ve always wanted to do – what if I can’t. That was part of my block too.

I let this dream of writing a book go – into the place where I didn’t believe I could have dreams. That safe compartment where it could be locked away, never tried. Only, it never died. If anything, turning away from creation only caused more chaos and destruction within me. I didn’t know how vital these aspects are to my well being.

I let that voice of “I can’t” run the show. To keep things closed off tightly. Until, only recently, I realized that none of those thoughts are true. They’re a soundtrack that plays out in loops long established to try to protect myself. Somewhere along the way I no longer understood that childhood ability to create for the sake of creation. To simply be creative. To explore those realms of imagination. The realms that haven’t died. They are very much alive, just neglected. How can I expect to access them unless I start?

In this beginning I have found an unexpected excitement. In only a few short weeks of committing to this daily practice, I’ve noticed that the voices trying to tear me down have stopped. There’s nothing for them to attack – because instead of “not doing” and letting them get to me, I’ve started. I’ve completed my practice at the start of the day and have the rest of the day to come back to it, should I choose to. Or not. The fact that it’s already done means those thoughts have nothing to cling to. No way to get in.

Today, in particular, I was struck with the deepest sense of wellness I have experienced. Something from a deep well within me akin to peace. I feel well all over. In every facet of my being. I’m not sure when I’ve felt that way before. I must have and it feels like it’s a new level of healing taking place. A new level of feeling well mentally in particular but also my physical body and energetic body are more clear. In no longer completely denying these crucial aspects of my creative self or clinging to the struggle that denial has fostered, something completely new can appear. Even if I don’t know what it is, I know how it feels. Already this practice has become a vital part of my being.

This writing and creativity is for me, not any of those other things my mind becomes clouded with. It’s part of my path and practice. It’s my medicine. It’s up to me to take my daily dose.

As we move into Spring it is a time of fertility and a time when this energy is ripe with new seeds being sown. It’s a time of new beginnings. A time to just start and not because I know how something will end. Or if it will be destroyed. Or won’t be “good”. Even if it’s all “taken away” by some unknown force, the process of it never can be. The end result will be what it is. The process, however, never has to end. Just like stepping onto my yoga mat every day – this practice is there for me too, no matter what.

Creativity as much as anything else is now seeming to me a process of letting go. Of giving myself over to whatever wants to come through and allowing myself to just start.

To honour those seeds of starting all those years ago and see how, eventually, the season does change. The energy does shift. It’s been up to me to begin over and over and over. Without knowing that I would ever get to this place and now, without knowing where it will take me next.