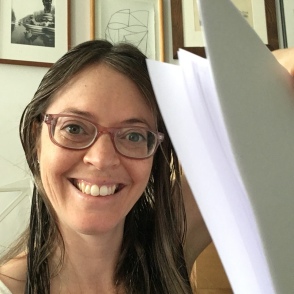 There is this tiny, fragile, piece of me that is trying to grow.

The fragility of this part of me allowed it to be swept away in the past. Lost in a sea of judgment and criticism. Fearing those words and actions that harm and hurt, it shriveled up and retreated. Now it is reforming, arising and rising up. It was quiet at first because I kept denying it and telling it to stay where it was. When it wanted me to write things I was unsure of, I kept putting it back in that place where it felt like I had been keeping it safe.

Only, it doesn’t want to stay there any more. All contained and waiting. It isn’t safe there in hiding. Hiding is causing it (and me) more harm than any fear might. It wants to emerge.

I’ve shared quite a lot about my creative process and how I cut it off in the past. How I learned to fear it. How healing it has been to be immersed in it so fully for the past few months.

Last week I finished reviewing the first draft of my book. I read it over and cut it back, watching the word count expand and contract at first and then contract quite a bit. By the time I finished all I could see was what didn’t work. The parts that needed to go. The unsolved pieces that still remained, not working either. A part of me felt defeated because I could see how far I still had to go.

In the past this is where I stopped. I let the voices of defeat telling me “this isn’t working”  to “this will never work” win. This time I recognized that place or moment as if outside of myself looking in and back. A witness of self-study seeing a moment of choice and noticing something different.

This time there was another energy combining with defeat. Something that felt energizing. This new energy told me I could keep going. That there was more wanting to emerge and to not give in to what wasn’t working. To not give into the part of me that wanted to believe it would never work and I should just give up.

That part of me that no longer needs protecting.

Now, I can see that this has been the moment when I would always abandon myself.

Only that didn’t work either. Instead, I ended up surrounded by a sea of believing nothing ever worked. All the unfinished, incompleteness of feeling like I was doing everything wrong took over and I lived there. I chose defeat over and over until I thought that was all there was. I never understood that more could emerge.

Now, with these two energies living side-by-side, I can feel the fuel of creativity balanced with the memory of defeat. I can feel them co-exist as if a new emergence of myself is tangibly floating beside the old, neither one alone and both supported.

This time, I choose to trust in my creativity.

This time, I choose to keep going.

I will no longer abandon myself.