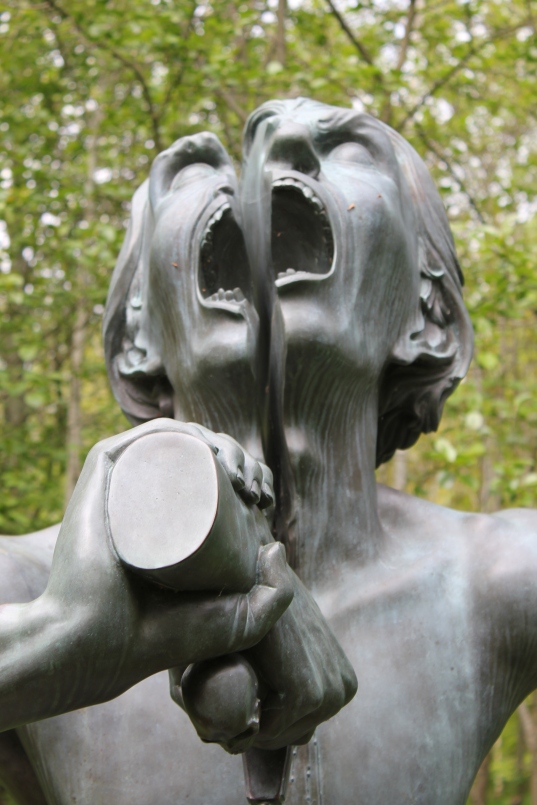 I remember when I first started going to yoga classes – the teacher would say when to inhale and exhale – and I simply couldn’t do it. I actually disregarded her words and thought “there’s no way that’s going to happen”.

I never dreamed it would be possible. It was such a struggle as it was to get into the various postures without that whole breath part getting in the way. As I think back, I remember the heaviness in my body, the inflexibility, the lack of movement – I was basically a big ball of stagnant and held energy. Trapped. Contained.

Even in my yoga teacher training (with no intention of ever becoming a teacher) moving on the breath baffled me. Do I inhale on that part of the sun salute? Or exhale? How would I ever remember which? How could I ever instruct a class on when to breathe? Especially if it was too confusing to figure out how to do myself.

At some point that year the movement and the breath started to come together. I could at least start to inhale and exhale when instructed. The start of the breath at least started the movement into the posture some of the time even though I needed to take some extra breaths before reaching the next part of a flow.

Time passed. Practice continued along those lines and then the extra breaths started to disappear. I only needed one breath per movement most of the time unless holding a pose, and then could breathe more deeply into it most of the time.

So that was it, right? I had arrived at this “syncing up” after all those years. Which is when, of course, the practice started to deepen again and reveal even more to me.

A few weeks ago I was in a class where we started lengthening the breath – for me that day it was to a count of 8. While seated, I could inhale for a count of 8, hold for 8 and exhale for 8. A slight sensation of fear rose up when holding the exhale – a sensation that was tolerable and familiar to me so I could stay with it and continue to hold and lengthen the breath. Even seated, this practice has evolved so much – I used to have a hard time even being with my breath in meditation let alone lengthening it to this extent.

Only this time we kept the breath work practice while moving throughout the entire class.

No longer contained to the safety of a seated posture, now the rise and fall of a sun breath to 8 counts on each movement.  I had done this before without counting and it actually felt great – everything in me moving at a slow, luxurious pace. The sensations of fear that were there while seated seemed to dissipate and my mind could drop out and in. My mind started to quiet.

Then we started to move into a sun salutation. This was new for me to practice in this way and as we stepped back into a plank for the first time I lost the 8 counts of breath. The breath came out of me as my right leg extended back and I gasped for air – fear started to rise up again. I was astonished at the force of it and found it so interesting that I couldn’t keep the full count of the breath while also stepping back. Or onto the move down to the mat and up into cobra. I needed extra breaths – and here I thought I had been “moving on the breath” for a while. When I actually paid attention there were all sorts of things going on to prevent this and I realized I had been moving on the start of each breath but not sustaining the breath throughout each movement all the time.

Without judgment and with curiosity I continued to watch what happened – and by the end of the class the witnessing quieted and I became more practiced in allowing the full 8 counts of breath to move me through. My breath did eventually lengthen and I no longer needed the extra breath to get from one pose to the next.

I loved the practice and continued it on my own at home and in classes. As I kept practicing it started to take less effort and I had fewer sensations of fear rise up. My mind could become still while moving – at least sometimes.

I decided a few days later to practice at the park. There’s an area I love that is a little secluded and I’m always a little worried to go there by myself. As I arrived, already in my head about if I should be practicing there or not because there weren’t many people around, I assessed the situation. There were two women with dogs sitting on the ground and a man sitting to the side on a bench. I felt a little unsettled but found a place near the women and started to practice – including moving on an 8 count breath.

It wasn’t long before the women left and I could already feel my fear of being on my own in this hidden part of the park rise up.

I tried to breath into it as my head was actively spinning in thought, my eyes open now instead of closed and I could see more men around. Some were watching. Some were walking through. Some were sitting over on the benches. Not a single woman in sight.

I kept trying to move on my breath by my senses were heightened and hyper-vigilance was switched on. My mind searching for an answer of whether I was safe or not. Thoughts that I was on my own and these men could attack me or carry me off into the woods competed with “you are safe” and “keep breathing”.

As the hyper-vigilant thoughts took over my breath shortened. As I returned to lengthening the breath I could stay in the belief that I was safe and start to let go of control and constriction. The fear also grew at times like waves, feeling like I was in a pool of threatening male energy. Ultimately I stayed in the vortex of thoughts as I continued practicing, keeping my eye on my surroundings from time to time. The sound of my thoughts was so loud it was like a vibration of screaming running through my head.

I finished my practice, completing the full hour, and was physically unharmed, left alone and able to even spend some time there before packing up.

My mind was racing.

Where was this fear coming from? Years of conditioning around staying safe – when and where and how to walk in order to do so? Or growing up in a time when men were driving around in panel vans stealing little girls off of the street? Watching Unsolved Mysteries as a kid (I was convinced I would be abducted by the age of 16)? Centuries of conditioning?

Is there truth to it? Perhaps. Is it also chatter in the mind? Yes. Do I want to keep myself safe and protected? Yes, I think so. Do I want to fear being somewhere just because there are men there and something “might” happen? No.

It brought a lot of questions for me to look at about my practice. How it can be so difficult to learn different techniques in a safe space – like a class (which don’t always feel safe) or at home (which may or may not feel safe to some)? How do I bring those practices more into how I am in the world? How do I match the movement to the breath and still the chatter of the mind in any situation – not just sitting? How do I start to feel safe and trust and stay open in any situation – no matter what the outcome may be?

I started to see more and more of how I could view any outcome as healing.

I started to think over and over about Patanjali’s Yoga Sutra 1.2. To translate and paraphrase he says, “yoga is the practice of stilling the fluctuations (or chatter) of the mind”.

The exact opposite of that was happening here. How on earth does someone cultivate a practice where all that happens in a place of safety can also happen in a place that feels unsafe? What is safety anyway?

The more I sat with it the more I realized that for much of my life I have believed people can’t actually see me. I mean – on some level I know they can – and I also tend to forget that aspect of life. I’m starting to wonder how much of that belief is also founded in the more spiritual aspects of myself that were shared (and not believed) as a child – mostly by boys.

I remember the first dream I had where every single detail came true the next day. I told some of the neighbourhood boys who told me that wasn’t possible and made so much fun of me I started to learn to not share those things any more. The ridicule and shame and fear of being judged were too strong.

If people didn’t want to see me, then I would start to not be seen.

In time I let those aspects of myself become buried – I hid them so that they wouldn’t be seen – so that I wouldn’t be seen. And there I was now, smack dab in the middle of a clearing surrounded by men and letting myself and my practice be seen fully.

Letting myself be witnessed – and not being dragged off or persecuted as a result. They let me do my thing. Some watched for a while and moved on.

I had a heightened awareness of my surroundings and of everything that could possible happen to hurt me and I also stayed. I stayed and stepped into the fear. I felt the chatter of the mind escalate, my breath short, and not only did none of those things I imagined happening happen, but a big piece of my spirit started to heal. No one (except my own inner voice) told me to stop. No one cut me off or said this was crazy or get out of there. No one hurt me.

It was fantasy (of what might happen) that took me out of the present moment.

I don’t want to intentionally put myself in danger just to see if I can practice – but what was “dangerous” about that situation? It was all created in my head through years of conditioning. What does that block out? Create? Not allow? Something stops flowing and becomes trapped.

I started to think more broadly as I know there are a lot of things going on in the world – right now and always – and a lot of people and places aren’t considered safe. I wonder too how much of how I move in the world contributes to that sense of safety or fear. Energy feeds energy and if I am filled with fear, those around me can feel it. How then does my energy impact those people around me and their belief systems and healing paths?

I can no longer be afraid to let myself be seen. I want to feel safe in the world – not because of my external surroundings (which I admit are privileged) but because of my internal world.

Being afraid isn’t the answer. Hiding isn’t the answer. Neither will prevent me from being harmed. Embracing the fear and transforming it into being seen: allowing the breath to flow (not constrict) and continuing to still the mind through these practices both on and off the mat give me more options.

It gives me more openness and freedom to move.

To start to not be trapped.