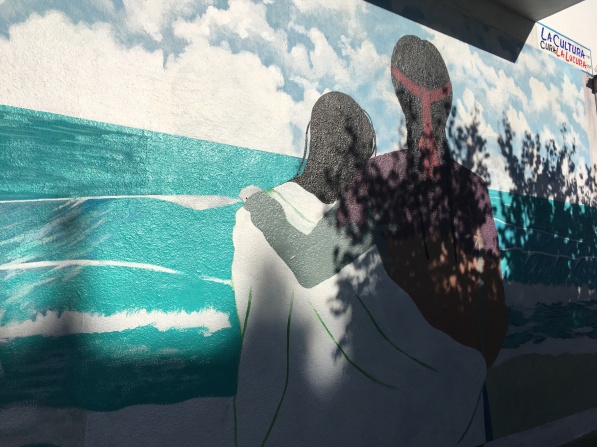 When I was a kid I often watched The Littlest Hobo on T.V. – it’s a series with a dog who moves from town to town, from home to home, helping to facilitate some sort of shift or healing or change. Growth. By the end of each episode he would move on and I would be left, sitting nearly frozen, and sobbing away. Sobbing my heart out at him leaving all by himself. Wandering off, most times without even saying goodbye. I felt so attached to the goodbye (extra hurt that there wasn’t a proper one) and I didn’t understand that he had to leave. Why? Why couldn’t he just stay there in that place where people loved him and needed him? He’d move on and I’d watch again with the same result. Happiness, joy, sadness. Over and over.

It is interesting now that I’m the one who is nomadic. I’m the one who decided to open to impermanence and sort of “hit the road”, coming into people’s homes and lives. I don’t know that I facilitate anything while I’m there and that’s okay. What I’m learning is how to receive more fully and how to allow gratitude to fill me up. In five months, I’ve stayed in 38 places in four countries.

Every time I arrive at a new place I feel at home almost instantly. The same things need to happen and yet new patterns emerge just as quickly. Simple things like finding food or a route to take to offer class. The different ways people go about their days. I like that emergence.

What I’m noticing lately is connection. I’ve been thinking of how much I would cry at those good-byes I witnessed through the T.V.  I’ve been thinking of how much my heart felt twisted up in knots and my stomach wailed. They weren’t even my own and yet I responded as if they were. As I move from place to place I’m noticing that saying goodbye isn’t difficult or devastating. I may or may not see the people I’m with again (some I’ve just met when I show up on their doorstep) and I notice that something has shifted.

I think that until now, I have confused connection for attachment. That confusion has caused me to grasp onto the attachments I’ve had, mistaking them for connection. When I think of the Yamas, aparigraha comes to mind as the virtue of non-possessiveness, non-greed, non-coveting, and non-grasping. The Yamas are a part of the key on the path of alleviating suffering.

That is what I was doing all those years ago – it was almost as if I watched the show in order to create and inflict suffering. Yes, there was joy also and I liked the show. Knowing myself now, I suspect I watched it to try to invoke some sort of suffering. As I take a look at myself through the lens of aparigraha I see that I have often clung to stuff, relationships, work, etc. and clung to the state of suffering itself because I was fearful of losing the attachments I had created. I was fearful that losing them would be painful. I think I was even afraid to lose my attachment to suffering.

I can see that I’ve sought attachments in relationships, not connection. I’ve created and spun many ways of becoming attached and, of course, feel that suffering when they become “taken away”. When a relationship ends, I wonder, how much of my grief is loss of the actual relationship and how much is the suffering because of all the attachments I’ve created are also being cut. I’m seeing how many times I’ve built something based purely on attachment. It’s kind of staggering to witness. Creating attachment comes so easily for me and, once lost, it can be disorienting, extremely painful and the attachments seek another place to stay alive or become, well, attached.

Except something new seems to be growing. Now there is an abundance of connection. I’ve created and strengthened the connection I have with and within myself. I’ve strengthened my connection with nature. As I continue to become more and more connected, I start to feel a true connection with other people. I listen more. I notice the play between being and feeling connected with others and what happens when there is a disconnection (particularly in being present when listening). What I’m starting to understand is that connection is limitless. Connection is a huge and powerful flow of abundance and connection has nothing to do with attachment. The more connected I feel and become, the less attachment I have or need. The foundation has started to shift.

When there is connection, there is no need for attachment.

As I leave one place for the next, I haven’t once felt a sense of suffering. I have felt so fully connected wherever I am that I haven’t needed to create attachments. I then haven’t needed to cling to those attachments or identify myself by them. I’m simply starting to flow and open to this huge channel of connection that is everywhere all the time. Moving on feels effortless.

The more I open to this abundant connection, the more full I become. The emptiness that my attachments helped create (or my own internal lack that helped me rely on attachments) and the fear of losing starts to give way too. The attachments are simply things I create, often to manipulate or find a false sense of security, belonging or being. The attachments have been a crutch. Maybe because I felt so very disconnected. Maybe I had to learn how to connect.

To learn the distinction between creating attachments and creating connection. What I’m starting to see is that you can’t covet connection. You simply are connection.

For whatever reason, this is part of my practice. Letting go of attachment and learning that my attachments aren’t real. Letting go of the expectation of suffering and seeing if I can let go of inflicting suffering. Shedding all of that energy spent seeking how to become attached and, instead, letting connection be boundless.